in Pasadena without dropping a set. 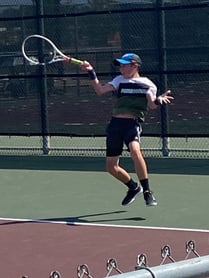 For those of you that don't know Greg he is an amazing young man. He recently won the Challenger tournament in Pasadena without dropping a set in a draw of 32. More importantly though is the way that he did it!

Greg played consistent but at the same time was very aggressive throughout all his matches. He would keep the ball in the court and then rip it to end points. When he went for BIG shots he didn't always make them but he put fear into his opponents when he did. When he missed he always stayed calm. His ability to play very consistent and then go for big shots puts him at a different level.

Most importantly, Greg loves to compete! Every match I watched whether he was winning or losing he was enjoying every minute while showing full respect for his opponents. Greg is deservedly moving on to the next level!